Could Dalston Be The New Shoreditch?

Many people are tipping Dalston to become the new Shoreditch as the two areas share striking similarities with both being well known for their creativity and diversity including being home to a number of trendy bars and eateries.

Dalston has been pinpointed over the last few years as the next up and coming location but it seems that in the last few months we are now seeing the first signs of the area taking the next steps to becoming a sought-after location.

Marks & Spencer have recently taken a site next to Dalston Junction station and this was then followed by a flurry of other lettings to well known operators such as Pizza Union, Tortilla and Le Petite Bretagne.

A number of trendy retailers have also opened at Dalston Terraces including a recent opening of the much hyped eatery Angelina.

The office population is also set to increase and we’re playing our part here by working on the Dalston Works scheme which provides about 30,000 sq ft of commercial space. We have recently let space in the scheme to ‘Sadhana Yoga’ & ‘RWD’ (a social media company). We’re now in talks with a variety of exciting office occupiers who are keen to be based in Dalston and this gives us further confidence that the area is going to continue to grow.

We are also separately offering a 3,000 sq ft unit at 55 Dalston Lane which forms part of the stunning All Press building

For further information about either opportunity please contact our team. 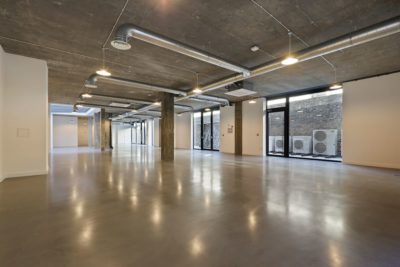 We are excited to announce that Newington Green’s Jolene, restaurant and bar operators, snapped up over c. 3,000 sq ft of space at The Bakehouse’s front of house. The warehouse-style unit is being transformed into a charming brunch spot and bakery that will showcase Jolene’s artisanal dishes and freshly baked goods. The sister restaurant to Primeur and Westerns Laundry, Jolene […]

We are pleased to announce that we have let c. 3, 000 sq ft of Dalston Works, a mixed-use development in prime Dalston, to civic and social organisation, Kingdom B.E. (KBE) on a ten year term. The charity joins a fantastic group of tenants at Dalston Works’ creative community; including international e-commerce group, Wowcher! […]